January 25, 2013
Edith Marcombe Shiffert is a minor American poet. Minor in this case means that, tho she is well known, her fame resides mostly within poetry circles. She has published many books, several with my print illustrations in them. Her style is modern but not rash or affronting. There is a melancholic feeling to many of her poems. But they are not about love or related themes; rather about nature, the outdoors, the countryside, insects and animals.  She wrote some haiku occasionally, but found it too easy.

A little of her life story can be read here:  <http://simplyhaiku.com/SHv7n1/reprints/Wieman.html> This was written by Jane Wieman back in 2007, so some of the information is not current now. She moved into a large Kyoto City Municipal care home a few years ago, and is pretty much confined to a wheelchair. She is very healthy, but does not write at all now.

For Edith's 97 (estimated) birthday, the care home wanted to give her a small afternoon party in her favorite French restaurant, Reborn. She and her late husband, Minoru, used to go there often. I, too, have shared lunch there with them. Edith wasn't able to attend herself; the care home brought to the party her lovely and beautifully dressed body in her wheelchair, with exquisitely done up white hair, full toothless smiles and ever bright, even sparkling eyes, and Edith's always gesturing hands. 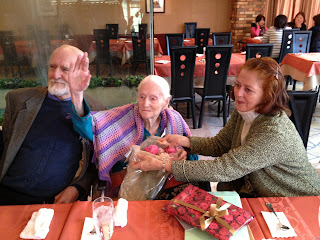 12 guests attended, including Edith's helper, a young, vivacious and very capable woman,  two of Minoru's four sons (one brought his wife), and assorted friends who have known Edith for decades. We each greeted Edith, some gave her birthday gifts, held her hands, laughed at her not remembering who we were or where she was, and in general appreciated this wonderful opportunity to share her with like-minded friends. Photos were taken before, during and at the end of the party. We ate a delicious citrus ice cream pudding dish, a small piece of her birthday cake, and rather good coffee. Sufficient fare for the occasion. 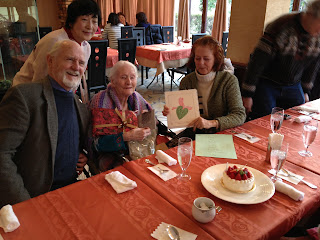 Edith with Morris and Judith, holding my print. 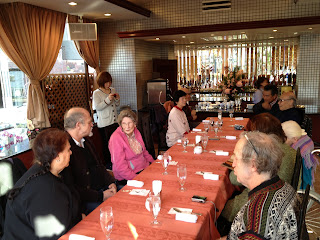 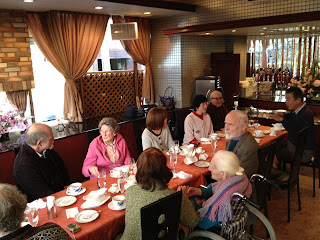 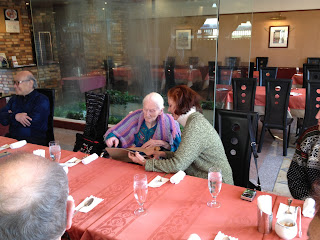 
On left, one of Minoru's sons, talking with Koka Saito the painter.

It saddened me, probably all of us, to see a once great poet, a fantastic woman, a truly rare human being, in an otherwise healthy body, but with no memory or awareness of her circumstances. Edith remembered none of  us, but was happy, eating everything put in front of her, spilling a lot of it on her lap, which Morris quietly picked up and places on a separate plate. The Japan Times newspaper is delivered everyday to Edith, but she does not read it. I doubt she would recognize even one of her own poems if someone showed it to her.

Is this the way one is to end? Why Edith? How could it have been prevented? Could it have been prevented, this descending into a mindless body? No doubt Edith will live to be 100.  Toothless, smiling and waving, eating very well, unaware of what is going on around her, not only writing no poetry, but not even living a poetic existence. I couldn't have ever imagined this kind of ending for Edith Shiffert. From her last book of poems, with photographs by John, this sums up Edith's life and attitude:
After all those years
the only things that remain,
a few brief poems.

On the head of the snake

There are literally a countless number of mountains in Japan. They do all have names, however, even if those names are known only by the families who live below them. So, from the beginning of the culture, anyone wanting to go anywhere, had to cross a mountain or more.  Such being the case, the Japanese by nature are a mountain climbing race. Or, more accurately in these modern times, a weekend, mountain strolling people. There are hundreds of mountain climbing clubs. Some are quite serious, and challenge high peaks in the Japan Alps. But most are smaller clubs whose members, usually retired folk, just enjoy walking thru the hills, taking photos of unusual flowers, stopping for a lunch break of rice balls and tea, eaten on some sunny knoll or beside a small, abandoned shrine.

There is, however, one very large group, with members from nearly every corner of the country. The Zodiac Mountain Climbing Club is based here in Kyoto where it was begun in 1960 by the late Kyoto University professor, Kenji Imanishi. (He made his name by refuting Darwin's theory of evolution. Tokiyuki Nobuhara wrote in his paper of 2010

Imanishi’s thesis was that a “peaceful existence” as an equilibrium within the
whole biosphere of nature is the goal of all living organisms in their adjustment to their
social environments.  (italics mine))

This club has a membership of over 100. Mostly retired teachers and some business people, doctors, housewives, almost everyone is over 60 years old with the oldest being in their late 90s. All of them are fit as fiddles. I have been a member since 1983, am the only foreigner, and have not missed a single climb in 30 years. Every January on about the second weekend, which is a national holiday,  we gather together near the chosen mountrain in some inn or hotel for a great evening meal, which includes lots of sake drinking, singing, sharing local foods, and general catching up of news. 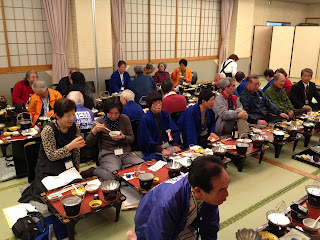 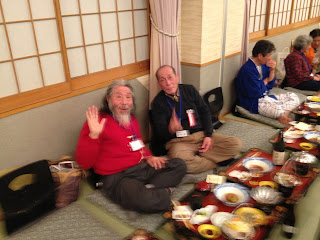 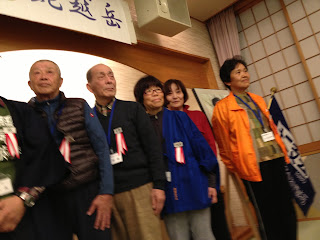 Next morning, early, we eat breakfast, don our mountain climbing gear, get into a bus or into private cars, and drive to the mountain whose name is the same as the year's. 2013 is the Year of the Snake. There are in Japan many mountains which have animal names, tiger being one of the most common. This snake was on Kyushu Island, quite far from Kyoto. I was going to take a night boat, a pleasure for me. But I opped out for the Bullet Train so that Kimiko and I could at least ride together to Okayama, her hometown, where she was to see her mom and one of her sisters. I arrived at Beppu in the mid-afternoon. Beppu is very well known as a hot spa town. That whole area around Beppu is volcanic; there are spas all over the place, steam vents everywhere. Quite fascinating. Our hotel had a spa, but it was lukewarm and not interesting at all. This means that I will have to go again sometime, and boil myself in a real hot spring. 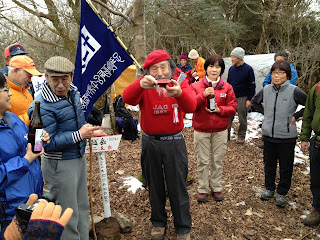 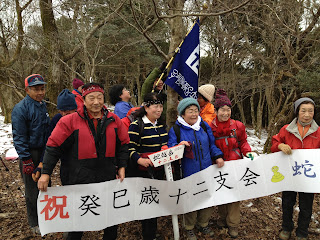 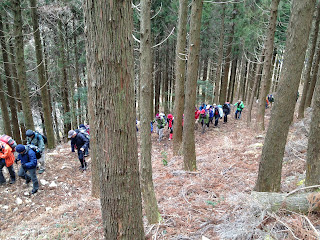 Snake Mountain is 1,024 meters high, about one-third a mile up. We did not start from sea level, however. Our bus took us up most of the way, and we walked up to the top in 40 minutes. This was an easy climb. Other climbs have been rougher. The weather was good; no snow falling, only patches here and there on the ground.

After everyone reached the top, we drank a toast, gave cash gifts to those who were 60 years old, 70, 77, 80 and 88 years old. These ages have special meaning for the Japanese. Remembering that in the old days, living to be 40 was a feat, I wonder why every year past 50 isn't an opportunity to receive some gift.

After enjoying some freshly brewed coffee and eating part of our box-lunch, we made our way back down to the cars and bus, and drove to the railroad station for some of us to return home.

I went to Okayama, tho, to meet Kimiko and stay for two days with her sister's family. Both Kimiko and I are Rabbits. So, two years ago, I and only one other were gifted on top of Rabbit Mountain. (Kimiko has never attended this mountain climbing adventure.) That climb was hard, quite unlike the idea of what a rabbit ought to be. Still, we had fun and could enjoy the scenery of the surrounding countryside. As long as I am able, and that may be a long time, I intend to climb all 12 animals' backs repeatedly.

THE SNAKE IN THE SNOW

In the Orient, the zodiac consists of 12 animals. In the West, 12 is the same, but not all are animals. Another difference is that each zodiac sign is one year long in the Far East, whereas the West's is one month.
So, 2013 is the Year of the Snake. Unlike the 2013's cousin which bothered Eve so much, Asia's reptile is one of good fortune. It is a god of sorts for many people in China and Japan. I am not too familiar with Korean customs or customs, but my guess is that there are folk there who continue to hold to the old ways.
The other eleven animals in the Oriental zodiac are, beginning at the start of the cycle, the mouse (some refer to it as the rat, but I don't like that nuance):  next is the cow, then the tiger, rabbit (both Kimiko and I are rabbits), dragon, snake, horse, sheep, monkey, chicken, dog and boar. Quite a zoo. No pandas or cats or pigeons or eagles or crickets.
In Japan, traditionally, new year cards are sent to friends, business associates, family members not present, school chums, clients, teachers and so on. In the old days, these cards were woodblock printed. Once a year, the family would get out the old knives from woodblock class in junior high school, buy some proper wood, and design something that included the year's animal, the standard greeting, GAN TAN, with open space for personal messages. However, that tradition has pretty much died. Now everyone makes the cards by computer. Before this present age, it was the home-style silk screen printer. Alas, this year we received so few woodblock cards, it almost isn't worth buying the New Year Cards holder.
Of course, I continue the tradition. You can see my snake on my Facebook page. Only three colors. My student, Terry McKenna, and Kimiko, and I printed 300 this time, 250 for domestic mailing on special post office new years cards , 50 on hand-made paper for international. Printing is done in December, then taken to the post office where the cards are kept until January first. Then, regular carriers and special part-timers deliver the cards nation wide. The second of January and the third, too. From the 4th, the usual mail is also delivered along with late-sent cards. It is a fantastic tradition. Getting a fist full of cards on January 1 is so exciting. Who sent us cards this year? Who did we forget to send carts to? Shall we? Must we? We will. This conversation is repeated every year by several million families I am sure.
Look carefully at the card I made this year. There is the happy, silly-looking reptile grinning at you. On the left side is the red GAN TAN greeting. What is that brown stuff at the bottom? Like the West's baby-year chasing away the old man-year, the bright, pretty green snake is emerging from the old, useless skin of its previous incarnation. On the skin, faintly seen, is the year 2002, which was the life it led 12 years ago. Snakes shed their skins, an obvious subject for a new year's card I thought.
Snakes do not especially like snow. That's why they sleep thru the winter. In Kyoto, snow is not an option lately. When any snow does fall, usually in the nighttime, it is gone by the next afternoon. Wasn't always this way, of course. But it is recently. We had one rather large snake and a smaller, offspring in our garden. I haven't seen either for a while. They have both moved, or are asleep under the house. This is their year; maybe I'll feed them the noisy children who live down the street. 12 years from now, they'll be too big for snakes to eat. Something to think about.
written by Richard steiner time: 9:58 PM No comments:
Email ThisBlogThis!Share to TwitterShare to FacebookShare to Pinterest
Newer Posts Older Posts Home
Subscribe to: Posts (Atom)